The ‘Great Fall’ and the road to recovery

The COVID-19 pandemic has unleashed economic effects unlike any the world has seen before. Among the most disruptive events of our lifetimes, it defies conventional labels.

A comparison of the current economic environment with past recessions speaks to the severity of the shock produced by the pandemic and the global efforts to contain it. I use the United States as my example in the illustration below, but the story is similar around the world. The shock to economic growth, and to employment as well, from pandemic-containment efforts make even the 2008 global financial crisis seem insignificant.

An unprecedented shock to U.S. GDP

Yet comparisons with the Great Depression also seem inappropriate; its economic shock lasted four years. Instead, I might characterize this period as the “Great Fall.” Although the current shock is severe, recovery can begin sooner than with past recessions, once the biggest health risks are deemed to have passed sufficiently that businesses can resume operations.

How growth resumes: A two-phase recovery

Vanguard’s baseline case assumes that sweeping restrictions on activity in the United States, Europe, and Asia begin to ease by the summer . We expect that activity will resume in a staggered fashion, with some segments of the economy gearing up more quickly than others. Will recovery be “V-shaped” or “U-shaped”? In fact, we expect it will be a little of both.

A V-shaped recovery, so-called because of the letter it resembles on a chart, is a function of just how rapid a fall we’re experiencing, so severe that it’s unlikely to continue for long. Technically, we’ll be out of recession as soon as GDP rebounds from pandemic-induced lows and unemployment starts to decline.

But that doesn’t mean things will be rosy. Getting business activity back to where it was before the pandemic could take two years—a U-shaped recovery—given shocks to both supply (stemming from containment measures) and demand (stemming from consumers’ likely reluctance to immediately resume face-to-face activities such as dining out, traveling, or attending large events). Some parts of the economy will recover more quickly than others. But it is unlikely we’ll see the labor market as tight as it had been before 2023, which means the U.S. Federal Reserve may be on hold near 0% interest rates for that long as well.

Again, I use the United States in the illustration below to convey the two-stage recovery, but Vanguard expects a similar experience in other developed markets.

A recovery in phases 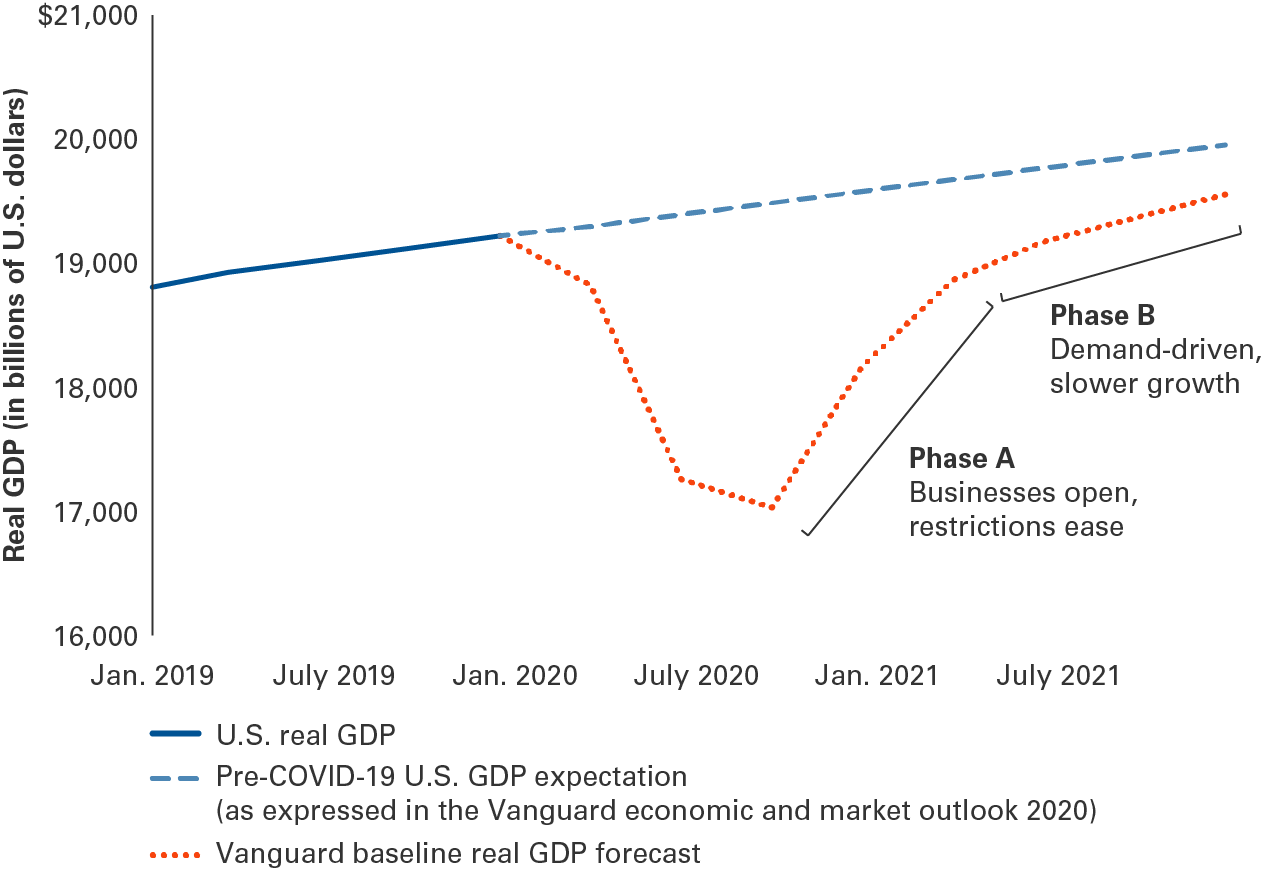 Vanguard has said since the pandemic began that a bold, swift, and efficient policy response is required to limit economic scarring such as bankruptcies, insolvencies, and permanent layoffs. We’ve seen hundreds of policy responses around the globe in the last two months, both monetary (through the purchase of securities to keep markets liquid and functioning) and fiscal (through cash payments to help keep individuals and businesses afloat). In retrospect, policy responses that addressed the global financial crisis may seem like a useful dress rehearsal.

We’ve broadly supported policy efforts globally that to date have totaled in the trillions of dollars, and some of my Vanguard colleagues and I continue to share our expertise and perspective with policymakers. A “whatever it takes” approach is appropriate for the unprecedented nature of the shock. And markets have responded. An index of financial conditions that we watch closely has stabilized much more quickly than it did during the global financial crisis, a testament to the depth, breadth, and speed of policy responses. Undoubtedly these efforts have longer-term implications such as how central banks eventually start unwinding expanded balance sheets and how governments address larger fiscal deficits.

Any recovery assessment must, of course, consider when broad shutdowns of economies will end. Vanguard’s assessment envisions that economic activity will largely have resumed by the end of the second quarter. As economists rather than epidemiologists, we can’t predict whether a second wave of the virus or a mutation would require another round of broad shutdowns. We can only qualify this as a “risk” to our view, and if it were to occur, our prognosis for economic recovery would be much less sanguine.

But risk—to an economist, anyway—is the likelihood of something other than our baseline view occurring, good or bad. Faster-than-expected availability of a vaccine or an effective COVID-19 therapy would put us on a quicker path to recovery, certainly in terms of consumers’ willingness to resume normal activities. So would a discovery that a critical mass had already been exposed to the coronavirus and that we’re closer to “herd immunity.”

Realization of such an upside risk wouldn’t make the Great Fall any less of a defining experience. Profound shocks have historically accelerated trends already under way—I think of telecommuting as an immediate example—and led to changes in society and consumer behavior. We’re going to have a world of change to contemplate.

All investing is subject to risk, including the possible loss of the money you invest.